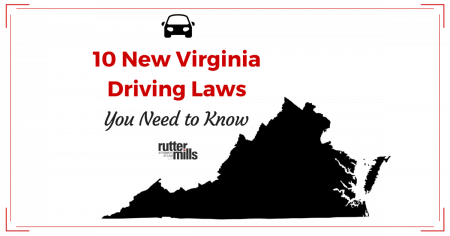 As auto accident attorneys with over 50 years of experience winning cases in Hampton Roads, we know how important it is to constantly be aware of all new laws effecting drivers in Virginia. On July 1, hundreds of new laws passed by the Virginia General Assembly went into effect across the state, and many are important for Virginia drivers to know. Here are ten brand new laws.

$100 Fine for Smoking in Car with Child

It is now illegal to smoke in a vehicle with a child under the age of 8-years-old.

Senate Bill 117 creates a traffic infraction with a $50 fine for opening a motor vehicle door when it is not reasonably safe to do so. Dooring, commonly used in reference to bicyclists, occurs when a motorist opens his vehicle’s door in the path of an oncoming cyclist or other vehicle. The impact can seriously injure or kill a bicyclist.

Learner’s permit holders under age 18 may no longer have more than one passenger under age 21 even if a parent is present. The passenger limitations on all provisional drivers’ licenses also do not include household or family members. The initial license issued to any person younger than 18 years of age is considered a provisional driver’s license.

Learner’s permit holders over age 18 may not have more than one passenger under age 21, with the exception of household or family members. The passenger restriction was previously placed on passengers under 18.

Learner’s permit holders may not use a cellphone or other wireless telecommunications device while driving, even if the device is in hands-free mode, except in a driver emergency or when the vehicle is lawfully parked or stopped.

3 New Regulations for Passing Vehicles, Pedestrians, and Others

Motorists may cross double yellow lines to pass a pedestrian or a device moved by human power, including a bicycle, skateboard or foot scooter, if such movement can be made safely.

Drivers passing a stationary mail vehicle displaying a flashing, blinking or alternating amber light must proceed with due caution and maintain a safe speed for road conditions.

When passing stationary refuse-collection vehicles on roadways with fewer than four lanes, the driver must decrease his speed by 10 mph below the posted speed limit and pass at least two feet to the left of the vehicle. When passing a stationary refuse-collection vehicle on a roadway with at least four lanes – and at least two lanes intended for traffic proceeding in the same direction – the driver must pass in a lane not adjacent to the vehicle and yield the right of way.

Bicycles, mopeds and other non-motorized vehicles are now included in the list of vehicles for which a motorist can be cited for following too closely.

The goal of many of these new laws is to help prevent auto accidents and keep people from suffering serious, life-changing injuries. If you or a loved one has been injured in an auto accident by no fault of your own, Rutter Mills can help. We have the experience and reputation to fight the insurance company and help you get the compensation you deserve. We are available 24/7, so we’ll be here when you need us. Call or text us anytime at 757-622-5000.